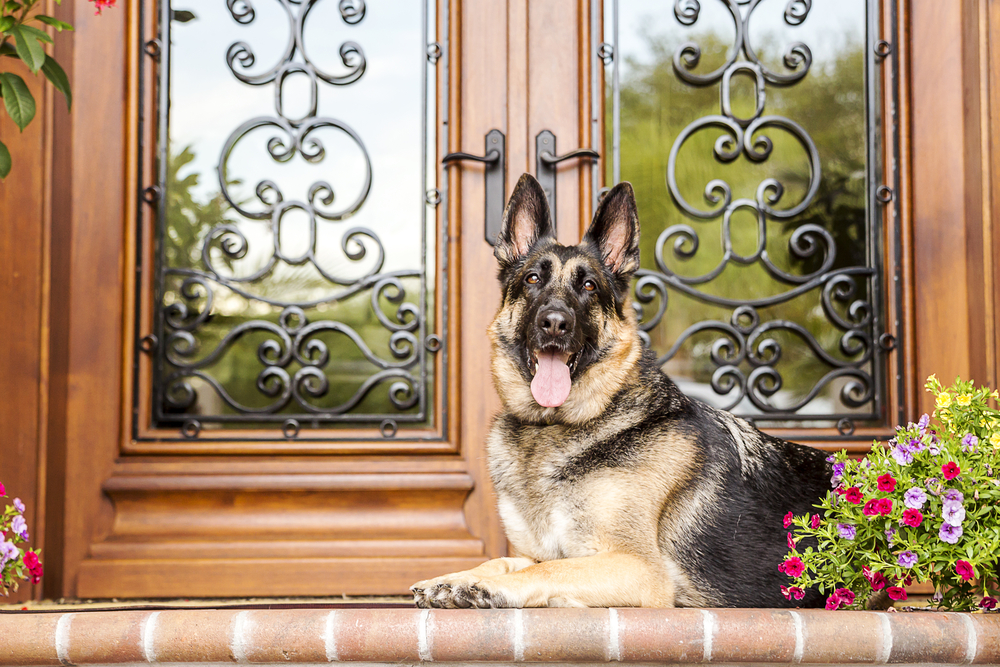 Many people think of guard dogs as a relatively new concept. However, if you look back through history, one of the main jobs of domesticated dogs has always been to help protect their owners from predators and threats, whether animal or human.

Many dogs automatically naturally develop a protective instinct over those in their human family, and this is especially evident in homes where there is a particularly strong bond between the canine and the people living in the property. Many experts remark that children and puppies raised alongside one another develop something akin to a sibling relationship. Nevertheless, there are specific characteristics that make certain breeds of dog more effective at warding off unwanted intruders. These tend to include:

If you are considering choosing a dog that is as brave and protective as they are a loving pet, then you may want to think about selecting one of the following breeds.

These large, strong dogs weigh around 150lbs making them perfectly capable of tackling a fully-grown human should the need arise. Great intelligence and a delightful temperament help make these creatures ideal guard dogs as well as interesting and lovable companions. They a generally very well suited to a family environment.

Rottweilers have been bred as relentless protectors, having originally been used to keep cattle safe from predators. Very loyal to their owners, they are quick learners and self-assured by nature. Despite their large size, they can move quickly if they need to and will have no trouble intimidating or tackling an intruder. Rotties can seem unfriendly until they get to know someone well, and some owners find that this breed doesn’t integrate as well with children as others.

If you are looking for an imposing dog, then look no further than the Great Dane. Extremely tall and fast, the Great Dane is highly obedient and easily trained, making them perfect protectors. Although they look intimidating, they love being around people, including children, and don’t act aggressively towards anyone unless trained to do so. A great companion as well as guard dog.

Energetic and spirited dogs, Boxers are smaller than many other guard dog breeds. However, they have extremely strong, square muzzles and wide jaws, making it easy for them to sink their teeth into a predator. Quiet, intelligent and very loyal, they are a great choice for families with young children. Be prepared to give your Boxer a lot of mental and physical stimulation, as otherwise he may get bored.

Originally bred to hunt lions, taking down a human predator should be a piece of cake for a Rhodesian Ridgeback. Very smart, and sometimes stubborn, this large, short-haired canine is extremely loyal and devoted to their humans. However, they are quite boisterous making them better suited to families with older children, particularly as they can be slow to mature.

Also sometimes known as Alsatians, these dogs are well known for their high intelligence, powerful nose and ability to be trained, as is evident in their roles in the military and police. Large and strong, they have the physical tools to challenge an intruder. Their double coat can be a little high-maintenance compared to short-haired guard dogs. Got children? No problem. German Shepherds are good with kids of all ages and extremely loyal to their humans.

Although not the largest of popular guard dog breeds, the Doberman Pinscher has an athletic build and plenty of strong muscle, making it perfect for chasing down and pinning an intruder. This breed is very sensitive and responsive in nature, as well as being considered one of the smartest in the world. Their temperament means that they are better suited to households with older children, and they require plenty of physical and mental stimulation to keep them happy.

For further advice on great breeds for effective guard dogs, contact us and speak to our veterinarian.

"Visited Highland for the first time today and Dr Gormley and his staff were so kind, compassionate and professional… even with my 15lb anxious/aggressive demon cat. I never imagined I'd be able to find a vet who would treat her with care and tender hearts even through all the yowling and screeching, but they were wonderful. Thank you so much for treating Reese and being so patient and thorough with your explanations.!"

“Dr Gormley and his staff are THE BEST! They have cared for my dogs and cats for several years now-- I wouldn't take them anywhere else. They are always friendly and caring-- especially in difficult situations, like the death of a pet. Dr Gormley always knows what to do quickly making a diagnosis and treatment plan I'll be forever grateful to him for saving my Dachshund's eye after a serious injury!”

"I want to thank Dr. Gormley and all of the Vet Techs at Highland Vet clinic. They saved my dog who was critically sick with Parvo. All of the staff at Highland are caring and truly love animals.

"Visited Highland for the first time today and Dr Gormley and his staff were so kind, compassionate and professional… even with my 15lb anxious/aggressive demon cat. I never imagined I'd be able to find a vet who would treat her with care and tender hearts even through all the yowling and screeching, but they were wonderful. Thank you so much for treating Reese and being so patient and thorough with your explanations.!"

Feel free to leave us a message using the contact form below and we will get back to you ASAP.